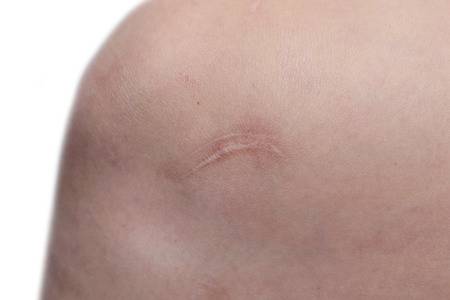 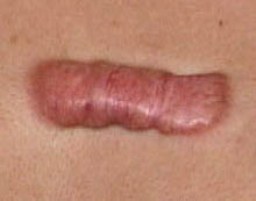 My wife has suffered wfroma large, painful and growing keloid scar on her left shoulder at the site where she received her childhood vaccinations. I also believe that was the cause of the keloid scarring in the first place. Would tamanu oil be the best oil to put on this to relieve the pain and to possibly reduce the scar (or at least keep it from growing any larger)? Or would EMU Oil be more effective in your opinion?

The pain is SO BAD right now that she wants to go to a dermatologist to get a STEROID SHOT which I do not recommend, but she feels there is NO ALTERNATIVE. Do you know what the side effects are from the steroids shots used in treating keloid scars so that I can educate her?

Thanks for letting me know as soon as possible, Dr. Ettinger. I appreciate all of your help!

P.S.–Do you ship UPS Ground? The reason I ask is that UPS is the only major carrier that does not irradiate any of their products.

When the body repairs a wound, it often does so by creating fibrous scar tissue. Internal scars that may develop following surgery can cause significant pain. Surface scars are generally painless, but they may be cosmetically unpleasant. In some cases, scars on the skin can develop into a special form of oversized scar called a keloid. Keloids are generally red or pink, and often form a ridge several millimeters above the skin. These scars occur when the body continues to fill the scar with collagen after it has healed. Darker-skinned people are more likely to develop keloids than those with lighter skin.

Conventional treatment of any type of scar is less than entirely satisfactory. Keloids and other scars on the skin may be reduced in size by freezing (cryotherapy), steroid injections, radiation therapy, or surgical removal. However, a new, even more, visible scar may develop in the place of the one that was removed. Similarly, removal of painful internal scars may lead to the new formation of painful scar tissue.

The herb gotu kola is said to help remove keloid scars. 1,2 When used for this purpose, it is taken orally, applied to the skin, or injected into the scar. However, there is no reliable evidence that it is effective.

According to some schools of acupuncture, surface scars impede the flow of “energy,” and thereby cause various illnesses. Acupuncture treatment of both surface and internal scars is said either to shrink them or, at least, to reduce their effects. However, there is no meaningful scientific evidence to indicate that acupuncture offers any benefits for scars.